Why I'm a Genital Integrity Educator:

When I was pregnant, I knew nothing about circumcision. My research consisted of a YouTube video and the opinions of family members that consisted of "have you ever SEEN an intact penis!?" and "Don't you want him to look like his father?!" I decided I would leave it up to my husband. I mean, he's the one with the penis right? It should be his decision. Well thank God when I asked him, he said absolutely not. I was relieved. The video on youtube was unsettling, to say the least. But, should we be leaving this decision up to our husbands just because they have a penis? After doing over 12 months of research I can tell you, No. We shouldn't. When my son was forcibly retracted at UC Davis Medical Center, I was on a mission to find as much information as I could on the topic so that I could best protect my son. I let him down by not being his advocate that day, and I will never forgive myself. I don't want misinformation and misconceptions perpetrated by medical professionals to hurt you too. The first thing I did was order a circumcision information packet from peaceful parenting at drmomma.org and an "intact don't retract" information packet from wholenetwork.org designed for medical professionals. The more I read, the more I was against it. In my opinion, it's one of the biggest medical frauds in the history of mankind.

I have compiled a list of websites that will lead you to internet articles, medical journals, scientific studies, blogs, videos, interviews and more. I hope that this helps you as you try to decipher the abundant misinformation that surrounds this topic today.

Some main points you will find in the research below are: 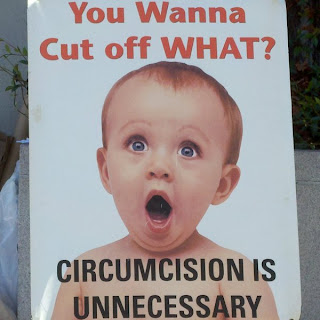 
Comments from parents regarding pain, regret, and complications from their son's circumcisions:

Intact and famous (debunking the myth that intact boys will have social issues because of it):


News coverage video of a death from circumcision http://youtu.be/7YSBS9y9YvQ

Effects on breastfeeding and maternal bonding

Proper Hygiene for Intact Males and Protect your Intact Son

Circumcision and Anthropology and Sociology perspectives

(You can never actually reverse a circumcision. Once the nerves and tissues are cut away, you can't get them back. You can, however, use techniques to grow new skin based on the remaining penile skin to recreate a similar structure to what would have been there. The natural protective and gliding functions can be restored!)

List of resources on genital anatomy from peer-reviewed research.

Although this is comprehensive, it is not everything and new information will be added as it is available.
Posted by CircFacts at 10:45 PM

Email ThisBlogThis!Share to TwitterShare to FacebookShare to Pinterest
Labels: circumcision, circumcision benefits, Circumcision pros and cons, circumsize, medical benefits of circumcision, research, Should I circumcise my son?, whether or not to circumcise
Newer Post Home